GINI celebrates success. The Inaugural GINI Awards in 2010: Joined by the founder and president of Interifath Power and Light, Rev. Sally Binhgam (bottom row, center), this started the tradition of annually recognizing three faith communities who have demonstrated exemplary commitment to Earth Care.

First Presbyterian Church in Elizabethton has led many efforts to share their visions and values in the Tri-Cities region. Read the description of their actions as a green congregation (scroll down to that section). They demonstrate ways that active participants take on leadership roles and make things happen...ranging from Peace Marches, to rain barrel construction, to composting and grounds management, to support for native and indigenous peoples through sales of their artwork. In 2010 First Pres was awarded a GINI "Justice" Award for its annual  Dennis Cove steam clean ups. In 2012 GINI recognized their work advocating against Mountain Top Removal, with a second "Justice" Award. Holston Valley Unitarian Universalist Church, Gray, shares their building and their talents through development of community gardens, and helping with the United Religions Initiative. In 2013 we gave HVUUC the GINI Spirit Award for growing an impressive amount of produce in their community garden that all went to the local food pantry. Holy Trinity Lutheran Church, Kingsport, has provided their Energy Task Force update for 2017. The Energy Task Force (HTLC-ETF) along with Property Committee have been busy and are seeing some positive changes.

The Energy task force along with Property Committee continue to work on bringing down our energy costs and hopefully you have seen some positive changes.    We converted lights in the fellowship hall (all 200 of them), as well as the 47 high lights in the sanctuary, to LED lights. The efforts are paying off as energy usage is down 19% saving us $3090/year, and giving us a solid return on our efforts.  This cuts our “carbon footprint” by 19 tons/year helping future generations.   Additionally, this helps on future property labor as the LED lights last 3-20 times longer than the bulbs we had.

In 2018 we hope to swap lights in the gathering room, the office, and remaining hallways.

Munsey United Methodist Church hosted a series of mid-week Care for Creation sessions, in 2010 and 2011. This was the second year that their Creation Care effort was celebrated with a luncheon, served by a local food group from Greeneville, following the Sunday morning worship services. Wednesday evening sessions focused on a variety of ways that groups are working to be mindful of the blessings and bounty that we share. Munsey was recognized in 2010 for its Creation Care series with a GINI "Spirit" Award.

St. John's Episcopal Church has reduced its energy usage by 50% over the past ten years due to a thoughtful and methodical plan and leadership.  It is still actively tracking and reducing energy use and updating energy efficiency. St. John's hosts the "Chasing Snakes" race each year to benefit Interfaith Hospitality Network of Greater Johnson City and has made strides to reduce waste, including a major recycling and composting effort, and reducing the amount of plastic giveaways. Awards for the race were made by a local potter, and no plastic bags were used for t-shirts and information. St. John’s HVAC system is comprised of a circulating water loop that goes to either a cooling tower or boilers, then energy-exchanged to air to cool or heat different parts of the building.

Starting in mid-2016 group from St. John’s buildings/grounds and finance committees began planning a project to look into improvements in the physical plant. Two studies were commissioned to look at the circulating water flow system and the entire HVAC system. Both studies were completed by year-end and recommended balancing water flows across the different areas within the physical plant and changing out the pump and motor to install two variable frequency drive (VFD) motors and pumps, along with a programmable logic controller to monitor conditions within the conditioned space. Waiting until after Easter when weather conditions were more moderate and church use was lessened, the new equipment and controller was installed. Meanwhile, in late winter and early spring 2017, 61 LED (20 watts each) light bulbs were purchased and a scaffolding system was purchased to facilitate bulb replacement. The costs for this project totaled $56,000 ($55,000 HVAC and $1,000 LED bulbs). 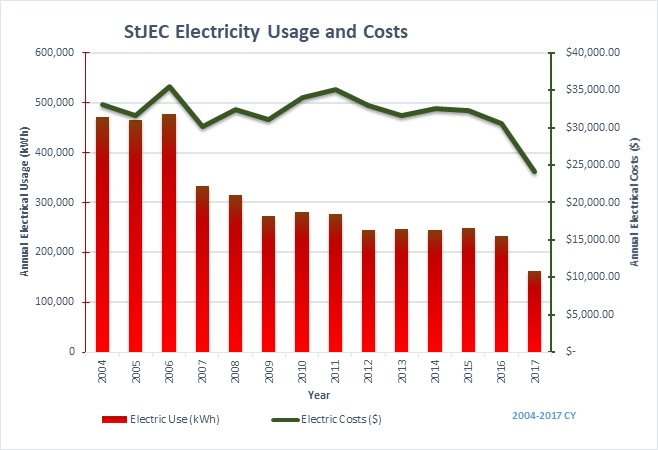 For efforts made in 2016 and 2017, St. John’s Episcopal Church in Johnson City was recognized as a Certified Cool Congregation in October 2018. The Vestry, Finance, Building & Grounds, and Earth Guild committees undertook an ambitious project to reduce their electrical usage and costs through improving their heating and cooling plant and beginning to convert lighting to LED energy-saving bulbs. Since completing the HVAC project in 2017 and replacing the lights in the Nave, St. John’s has reduced energy use in 2017 by 80,400 kWh over 2015 levels. This reduced St. John’s carbon footprint by 60 Metric Tons annually. The church also saved over $7,400 a year at the end of 2017 over 2015 in electricity costs. St. John’s reduced energy consumption by 42%.

To get recognized nationally as a congregational leader in saving energy and caring for God’s creation, St. John’s sought certification as a Cool Congregation through the national Interfaith Power & Light organization. In October 2018 St. John’s received notice that they are now recognized as a Gold level Certified Cool Congregation. The gold level certification is the highest level, indicating a 40% or more reduction in energy use. The letter below from Interfaith Power and Light explains the certification:

Congratulations! St. John's Episcopal Church is now an Interfaith Power & Light Certified Cool Congregation. You will be certified at the 40% (or more) carbon reduction level. The work you are doing is an inspiration to all of us. You are making a real world impact that people both now and in the future will benefit from.

In September 2018 we took part in the Global Climate Action Summit. During the opening Multi-faith service at Grace Cathedral, IPL presented a scroll of over 12,000 congregations, faith communities, and households who have committed to reduce their carbon footprint. Your Congregation was listed at the top of our scroll as being one of the congregations who has been a climate leader.

Shortly we will be sending you your certificate in the mail that you can share with your community. If you have any questions please let me know.

We look forward to seeing what you do next! 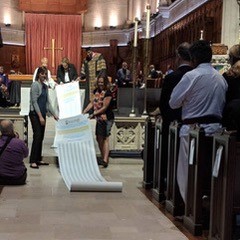 St. Mary's Catholic Church, in Johnson City,  started small in 2012 with a community garden, and in 2016 they were recognized by the national Interfaith Power and Light organization as one of six award-winning "Cool Congregations"for a series of energy efficiency measures implemented in the previous year. They have conducted sales of fair trade coffee & chocolate and encouraged the parish to recycle for many years.  The church and school recycle paper and aluminum cans. The Justice, Peace, and Integrity of Creation (JPIC) committee avidly advocates for the use of reusable dishes or paper products at church functions rather than styrofoam. By 2017, they saved over $2000 a year.

In the spring of 2017, they began replacing lights in the School. For example, St. Mary's replaced nine 500 watt HID (High-intensity discharge) lights in the gymnasium with new 115 watt LED lights.  This alone would be a great savings, but four of the new LED's give as much light as the old lights. With all nine LED lights on it is like being at the beach in the bright sunlight.  They also replaced lights in the auditorium, hallways, and classrooms. 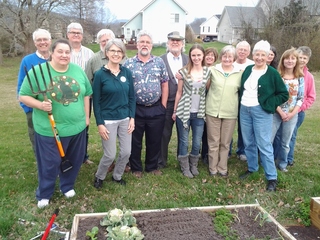 SAN FRANCISCO and JOHNSON CITY, April 13, 2016 — A week before Earth Day, Interfaith Power & Light (IPL) is pleased to announce that St. Mary’s Catholic Church of Johnson City Tennessee is one of the inspiring winners of Cool Congregations Challenge as the national Energy Saver congregation in the United States. This award recognizes a united effort by religious congregations across the country to address global warming by reducing their carbon footprint and by becoming inspirations to their members and communities. IPL and their state affiliate, Tennessee Interfaith Power & Light, and local affiliate, Green Interfaith Network, join in recognizing St. Mary’s Catholic Church for this award.

“Tennessee Interfaith Power & Light congratulates our interfaith partners - St. Mary's and the Green Interfaith Network - for their outstanding work in reducing the church's energy consumption and carbon emissions,” said Louise Gorenflo, Executive Director.  TIPL is a statewide interfaith network of faith groups seeking spiritual approaches to meet the challenges of climate change and justice. Former Green Interfaith Network’s President Carol Landis stated, “As one of the founding congregations of GINI, St. Mary’s has taken up the challenge of greening their church and succeeded beyond anyone’s imagination. Their dedication to protecting the environment can be one achievement that all congregations in the Tri-Cities area can be proud of.”

The Cool Congregations Challenge is an annual contest by IPL to recognize and inspire congregational leadership in the energy and climate arena. Final entries were received in January, and then judged by a panel of experts from Interfaith Power & Light, EPA’s Energy Star, and the U.S. Green Building Council. Judging criteria included: a well-defined project with measurable objectives for climate benefit, creativity and resourcefulness in executing the project, congregant engagement in the project, and inspiration.

Don Davis, GINI Board member and congregant at St. Mary’s, outlined some of the actions their church did to reduce energy use and save significant money. “Our challenge was to step up to Pope Francis' direction for all to help green the world.  We have been doing recycling, turning off lights when not needed, and have installed a geothermal heating system. There was no money in the church budget for most of the changes we wanted to do.  We not only wanted to save dollars, making our church more energy efficient, but to help the parish to understand the importance of being good stewards of our earth.  The Green Interfaith Network helped us conduct an energy audit of both electric and water systems in our church, school and out buildings to see where we could be more energy efficient. We started with replacing lights with LED lights and put timers on appliances that weren’t used frequently. Then we added a water collections system to provide water to both the community gardens and the school garden and also fixed leaking toilets and drinking fountains, saving 1,000 gallons a month.  St. Mary’s published an article in the church bulletin and newsletter to let the parish know what we were doing and a how to do a home self-audit to save energy.  We had over 40 homes that did the audit and made energy saving actions. Within the first six months, St. Mary’s had saved over $1,000 in energy costs and we continue to save thousands of dollars annually.”

The faith communities represent many different religious backgrounds, but all share a common mission – to be good stewards of Creation by responding to the threat of climate change. They do this through activities undertaken in their own facilities and on their grounds that reduce their overall carbon footprint. The Rev. Canon Sally Bingham, founder and president of Interfaith Power & Light, says, “Once again, it gives me great pleasure to see the US faith community showing that carbon reduction is possible.  It is creating jobs, saving money and saving Creation.  These congregation winners are serving as examples for their communities and leading the way to a clean energy future. Congratulations to the congregation leaders.”

The Cool Congregations Challenge shows that people of faith are united by concerns about climate change. The winners provide strong moral role models for their communities, and their activities have a ripple effect with people in their own homes.  St. Mary’s Catholic Church will receive one of the five top prizes, a $1,000 check for the use of future conservation projects. 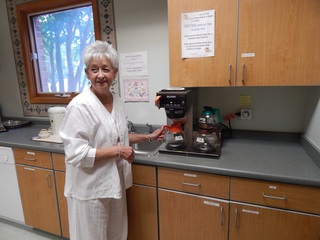 St. Mary's Catholic Church has installed an automatic shutoff for appliances when not in use.

Success Stories from the national organization Interfaith Power and Light

You need to be a member of Green Interfaith to add comments!