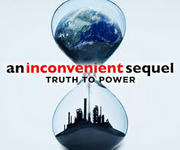 AN INCONVENIENT SEQUEL: TRUTH TO POWER

“After the final no there comes a yes.

And on that yes the future world depends.”

On Thursday, January 18th, at 6:30pm, Holy Trinity Lutheran Church on 800 Broad Street will host a showing of the documentary, Inconvenient Sequel. It reports on the catastrophic events that were predicted and have occurred together with the serious condition of planet Earth. The documentary provides for a positive future of God’s earth by identifying what is happening now and suggests practical actions to reduce carbon emissions and return our earth to a more livable planet.

Dave Hrivnak, Green Team Member, will facilitate the presentation and subsequent discussion.  While this documentary was premiered in late July, it has not been distributed to local area theaters. Admission is free.

A decade after AN INCONVENIENT TRUTH brought the climate crisis into the heart of popular culture, comes the follow-up that shows just how close we are to a real energy revolution. Former Vice President Al Gore continues his tireless fight, traveling around the world training an army of climate champions and influencing international climate policy. Cameras follow him behind the scenes – in moments both private and public, funny, and poignant -- as he pursues the inspirational idea that while the stakes have never been higher, the perils of climate change can be overcome with human ingenuity and passion.

The Green Team of the Southeastern Lutheran Synod of the Evangelical Lutheran Church is sponsoring the film.